A collection of books with an astrological spin on love. From Aries to Virgo… discover all-new tales of paranormal romance and urban fantasy.

Split into beasts of all kinds and forced to shift into humans, Khimairans were graced with humanity by the gods, and Dante’s humanity was fleeting.

Dante Coburn is running out of time.

He’s the leader of the Khimairan shifters and that won’t save him from turning primal. Once his beast takes over…there’s no coming back. Unless he can find his mate before he turns and kills everyone he holds dear. When Bailey walks into his life, he thinks he’s found everything he needs as his Leo zodiac mark is invoked. However, she wants nothing to do with Khimairan shifters and knows nothing of her real heritage.

Bailey can’t imagine living in a city where Khimairans dominate. The dirty shifters can piss off… The lot of them. They killed her mother and her aunt, and she’ll be damned if she has to live near them. When Bailey inherits more than a store from her aunt, which includes the intensely seductive Dante Coburn, Bailey has to face her desires to stay sane.

After a group of fanatics show up, Dante risks his immortal life to keep her safe, even if she’ll never have him. 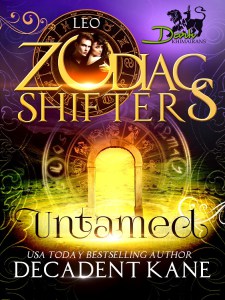 Dante sniffed the air. Spicy earth. Perspiration popped up along his skin. He cocked his head to the side examining the woman laying along the floor, drawn to her. Her breath was labored, but she didn’t seem to be hurt. Tight blue jeans hugged petite hips and her T-shirt had untucked on one side revealing a tantalizing bit of skin.

Carefully, he moved to her side. He sniffed her hair and nearly purred as he smelled her up close. Her zesty scent made his mouth water. A heat spread along his lower half, rising higher. He reacted to her. Could she be the one…his mate? He leaned in so close to her, his lips nearly touched her skin. He pawed at her, shaking her body.

A sign he’d found his mate, the one who would save his humanity. Every inch of him felt as if he’d caught fire. He choked down a gasp. Within seconds his Alpha magic worked at containing the fire pain and he clenched his jaw, refusing to show any further vulnerability within her presence. His gaze never left the woman.

The female stared at him with narrowed green eyes. He nearly lost himself in their depths as his body overheated, the beast inside acknowledging her as his.

She was his mate and a star would be born within him.

He could feel the white-hot heat compress, folding into itself inside his body, over and over, until all the heat zeroed in on one area. His chest. Pinpricks stung below his left collar, on his left pectoral. And then the sensation vanished.

But Dante knew what was left behind.

The fae, magic, and mystical worlds of possibility are carved into her soul. When she writes her stories, she pours all of her heart into what they whisper. She’s the kind of lady who will stare off into space to better understand her characters thoughts, listening to them speak their own version of the story.

She’s a mother of two girls and several furbabies. She’s engaged but has no intention of getting married.

Like most authors she’s been writing most of her life and has dreamed of being an author since the 5th grade.

When she writes, she writes to explore characters and a world first for herself. Then she revises, edits and publishes for readers.

Twitter
Keep up with all the latest Zodiac Shifters news here!