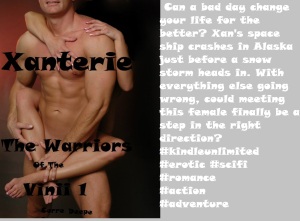 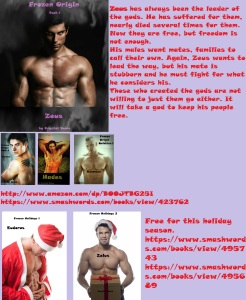 The gods are here and it seems they are loveable alpha males looking for someone to share their lives with. Zeus was first, he captured Sierra’s heart no matter how she tried to resist. Hermes and Hades followed with Morpheus right behind them. Now Eudoras and Zelus found their mates during the holidays so what’s next? Hopefully a demon series because let’s face it, those guys had the worst of it and deserve a series of their own even though technically, demons are gods, but all gods aren’t demons. Valentines is coming and Adonis and Aphroditus will be on the prowl looking for their mates. They will be offered as a two pack like the Christmas pack was.
I have enjoyed hearing from many of the readers who want to see more gods quicker. The gods want their mates quicker too but human females are a mystery to them so they have to take it slow so they don’t scare them. I hope everyone is having a wonderful new year and keep your eye’s out for new gods with exciting stories of their own.
Zeus http://www.amazon.com/dp/B00JBTG25I